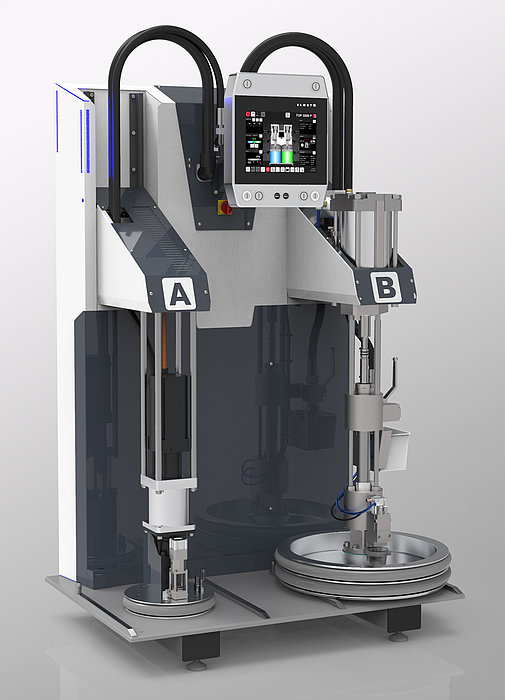 Oftering/Austria, September 2019 – ELMET (www.elmet.com) is presenting itself at K2019 as an international one-stop shop supplier for the entire field of injection molding two-component liquid silicone rubbers (LSR). One focus of their presence in Hall 12, Booth 12E49-5 will be their enhanced TOP 5000 P pneumatically driven dosing system which has a still smaller footprint than its predecessor, so setting new standards. ELMET will also provide an initial glimpse of the status of development of a servo-electrically driven dosing pump and premiere its new remote maintenance system for the TOP 5000 series.

As an addition to the TOP 5000 P model, ELMET is preparing for the commercial introduction of a TOP dosing system with a fully electric dosing pump which is driven by a torque- and current-controlled servomotor. Here too, the focus is once again on minimizing dosing fluctuations and maximizing efficiency and simplicity of operation. Both versions are intended for the mass production of high quality parts with tight tolerances. They cover shot weights from less than 0.1 gram up to several kilograms and viscosities ranging from 9,000 mPas to 3,000,000 mPas even when the viscosities of the two components differ greatly.

Despite occupying still less space in the production zone, the upcoming designs of the TOP-5000 dosing systems do not entail any compromises in terms of their highly efficient use of material, time and energy and their outstanding ergonomic characteristics. In addition to self-explanatory operation and visual display, these characteristics include the possibility of charging the system from different sides as well as guided drum changes with simple and foolproof step-by-step instructions on the display which make errors virtually impossible.

As Sales Manager Mark Ostermann explains: "Our electrically driven dosing system will be the result of very extensive development work, the first step of which focused on designing the pump group. Initial testing of the newly developed components of the pump group has demonstrated the uniform quality of delivery which is achievable using this new principle. At present, we are adapting the associated mechanism to the relatively high pre-feed pressure required by the servo-electric design. Once the system is ready for mass production, we will be able to offer a suitable solution for all market segments and applications up to and including LSR 3D printing. ELMET will thus be in a position to meet any possible future customer wishes. The new version of the TOP 5000 P will be available in the near future and the E version at a somewhat later date."

In terms of Industry 4.0 capability, all TOP 5000 series dosing systems have a VNC and an OPC-UA interface for data exchange with the injection molding machine. The newly created remote access interface means that, with effect from December 2019, ELMET will be able to offer customers a Premium Connectivity Package with email functionality and remote support. The software can automatically send email messages to predefined groups of recipients in the event of a breakdown or maintenance and drum change messages. In order to simplify support, this package also includes dispatch directly from the dosing system of support requests accompanied by a status report. A VNC link means that ELMET and operators can remotely access the relevant dosing system on the newly created online portal and associated app from anywhere in the world without requiring access to the customer's own IT network.

The numerous applications of TOP 5000 P, the top of the range model, which are being shown at K2019 emphasize ELMET's recognized skill set in LSR dosing technology:

ELMET Elastomere Produktions- und Dienstleistungs GmbH of Oftering/Austria, established in 1996, is an internationally successful developer and manufacturer of LSR dosing systems, fully automatic injection molds, valve gate cold decks, and turnkey installations for processing silicones and rubbers. Including the staff of its ELMET North America sales and service organization and ELMET Greater China, the company has some 200 staff.