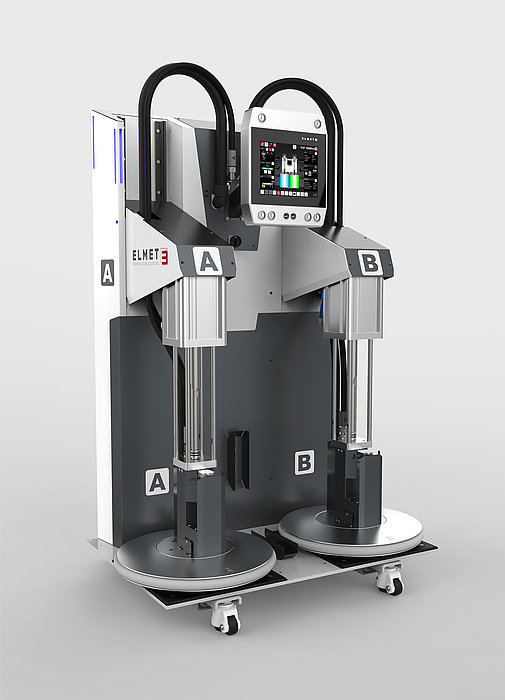 Oftering, Austria, September 2021 – ELMET is attending Fakuma 2021 as a one-stop shop supplier for the entire field of injection molding two-component liquid silicone rubbers (LSR). The centerpiece of ELMET’s presence in hall A5, booth A5-5306, is the new SMARTmix TOP 7000 Pro dosing system, which sets new standards in terms of functionality, process reliability and user convenience. Also featuring at the fair will be ELMET’s likewise newly developed all-electric SMARTshot E cold runner system with servomotor-driven needles which maximize flexibility, precision and controllability when injecting LSR into the cavities.

SMARTmix TOP 7000 Pro dosing system shows just what’s possible today
An all-round update of the previous top model, the TOP 5000 P, the new SMARTmix TOP 7000 Pro shows just what’s technically feasible in LSR dosing systems these days. With a footprint of only 1150x790 mm, it is the most compact of any commercially available dosing system suitable for 200 liter drums. The completely revamped pump unit has been further simplified and the number of parts minimized. Despite being capable of operating at pressures of up to 210 bar, the new unit’s slimmer design makes it significantly more compact. At the same time, this means that a significantly smaller volume of LSR is present in the system, so further increasing process reliability and reducing the purging volume. The reduced number of components facilitates cleaning and maintenance, while the reduced number of seals and the selection of optimized, FDA-compliant seal material reduce downtime.

Fully automated detection of follower plates and plate position now eliminates operating errors during drum changes and minimizes the corresponding handling time. The optimized and recently patented follower plate design enables material utilization of up to 99.6%, so making the SMARTmix TOP 7000 Pro even more economical than earlier systems. Instead of slide rails, full-surface slide plates facilitate drum changing, which can be carried out from three sides. The updated operator interface with its clearer structure also supports even more reliable system operation. Process reliability is further increased by the fixed, more readily accessible positioning of the material outlet, which is decoupled from the pump unit, so taking the load off the hoses leading to the injection unit.

The increased modular structure of ELMET’s new dosing system ensures a high degree of flexibility in adapting to changing requirements. Thanks to the new interface plate, the many and varied options available in the dosing technology range can also be retrofitted after delivery without the system having to be rewired. In response to customer requests for flexibility in selecting installation position, wheels can now be fitted as an option.

Another available option is the premium connectivity package which ensures worldwide access to the system via a web portal or associated app. In addition, a support request including a status report, which facilitates remote assistance by the ELMET support team, can also be initiated directly from the system. The integrated email function means users can be kept permanently updated about impending drum changes and maintenance work as well as any malfunctions.

New all-electric SMARTshot E cold runner system
Another new product at the fair will be ELMET’s SMARTshot E valve gate cold runner system in which the needle is moved and positioned by a particularly compact servomotor. This allows needle opening to be adjusted in the µm range and the injection process into up to 16 cavities can thus be balanced with considerably greater precision than was possible with the previous pneumatically or stepping motor actuated versions. Further advantages of SMARTshot E technology include a small nesting spacing of a minimum of 44 mm, the use of virtually wear-free miniature industrial connectors and optimized cable management with a cable duct that can be removed as a single assembly without the need for a qualified electrician.